Demand for tractors remains stable, but industry barometer tempers expectations for the second half of the year

Brussels, 16 September 2019 – Overall, some 96,428 tractors were registered across Europe in the first six months of 2019, according to numbers sourced from national authorities. Of these registrations, 21,285 tractors were 37kW (50 hp) and under, and 75,143 were 38kW and above. CEMA considers that 77,383 of these vehicles are agricultural tractors, the rest being quads, telehandlers or other equipment. An overview of the total tractor registrations in each country can be found in the annex.

Agricultural tractor registrations for the first semester increased by around 10% in comparison with the first six months of 2018. One should, however, remember that registrations in 2018 were impacted by new legislation coming into force on 1 January 2018, which resulted in a high number of pre-registered tractors in December 2017 without an increase in underlying demand. The current increase should, therefore, take this phenomenon into account, since 2018 is otherwise considered to have been a positive year for tractor sales. Graph 1 clearly shows that registrations in December 2017 peaked and, subsequently, were relatively low in the first quarter of 2018. When estimating the trend without this unusual peak, the first semester in 2019 continues the slight recovery for demand in tractors seen in 2018.

When comparing the trends per power category, registrations for all tractors increased in the first six months of 2019 compared with 2018, with the notable exception of tractors above 221 kW (Graph 2).  It is commonly acknowledged that there was a higher number of late 2017 pre-registrations in the lowest power categories. Overall, half of all tractors registered are below 75 kW and only one out of four is above 110 kW.

The two biggest tractor markets in Europe remain Germany and France (Graph 3). All tractor registrations in these countries significantly increased by 21% and 47 % respectively in the first 6 months in 2019 versus 2018. Italy saw a more modest increase of registrations (+6%) while Spain benefited from a solid +19%. In the United Kingdom, however, registrations fell by 3.5%. There were otherwise notable increases in Finland, Austria, Sweden, Norway, Hungary, Serbia, Croatia and notable decreases in the Netherlands, Belgium, and Slovakia.

In Germany, inventory build-up continued in 2018 and 2019 with a pull-forward effect probably linked to the coming into force of several regulatory and legislative changes. Therefore, manufacturer´s sales repeatedly increased last year but are now no longer able to maintain such high levels. End-customer markets however only slightly increased, with stability largely due to certain dealer pressure and a continued overall willingness to invest. Registrations, which had decreased strongly last year, were significantly higher in the first half-year of 2019 compared to the same period in 2018 (tractors over 50hp: +18 percent), as a result of the “Mother Regulation” effect. Significantly lower growth rates are now expected for the second half of the year. But all in all, tractor registrations >50 hp for the full 2019 might still be 8 to 10 percent above the previous year’s level.

In France, tractor registrations are currently booming. In the first half of the year, they increased by + 47%. In fact, if we correct the data by smoothing out the unusual peaks of registrations that occurred on December 2017 and December 2018, the growth would be around +25%. This strong growth is linked to the increase in agricultural income in France, and the rebound of investments in French farms after several years of parsimonious expenditure in agricultural equipment. A slowdown in growth is expected in the second half. Tractor registrations are expected to grow approximatively by + 25% over the year as a whole.

In Italy, registrations indicate a 6.5% growth (10,024 units YTD in June 2019), a positive sign even though in the last years the market is showing a substantial standstill in favor of second-hand vehicles.  In 2018, sales of second-hand tractors have been more than double those of new ones (37,807, with a 7.4% growth compared to the previous year). For the first five months of 2019, 19,590 used tractors were sold in Italy, an increase of 5.9% comparing to the same period of 2018. The trend is worrying, as this figure already exceeds by over a thousand machines the total registrations of new tractors for the whole year 2018.

In the United Kingdom, the market is being heavily influenced by the ongoing Brexit process. This has led to some volatility, as farmers react to the uncertainty ahead, despite farm incomes remaining fairly strong. Although machinery deliveries started the year quite well, orders have started to slow down and the second half of the year looks likely to be more challenging, at least until there is more clarity about how, and when, the UK will leave the EU. The Brexit-related volatility is reflected in Agricultural tractor registrations, which were down in the first quarter, up sharply in April but then down in May and June. Overall, tractor registrations were down 4% in the first half of the year.

In Spain, the number of tractor registrations has been surprisingly increasing until July adding monthly increases up which led to a total variation of +19,5% (18,2% for standard; 16,5% for NTT, 51,1% for crawlers and +60,4% for ATVs and ATUs). But nevertheless, such increase is not expected to continue the whole year since external factors driving the demand of tractor are not behaving positively and the imports dropped in June is such a way that the cumulative total changed from +11% in May to +3% in June. Second hand markets are decreasing for NTT (-4,3%) and increasing for standard tractors (+2,9%). We are estimating a shrinkage in the next months so the yearly change would be around the +10%.

In Belgium, total of tractors registrations declined by 3% during first semester 2019. The evolution covers two different trends, mainly a 5% increase in tractors <50hp registrations and a 7% decrease in tractors >50hp registrations. The market <50hp has been growing the last years because the target group (gardeners, municipalities, hobby farmers…) is growing and increasingly uses these tractors. The evolutions on the market >50hp should be correlated with the following factors: on one hand, a moderate enthusiasm amongst the arable farmers because of the prices outlook and on the other hand, the disposable income of dairy farmers should decrease because of the drought. All in all, tractor registrations for the year 2019 are expected to be stable.

In Turkey, after a total sales record was achieved in 2017, the tractor market began to decline sharply in the second half of 2018 and has increasingly continued to fall in the first half of 2019. After closing the year 2017 with 72.909 units, the domestic sales stood at 48,356 units in 2018. According to current provisional reports, the market declined 62% in the first five months of 2019 compared to the same period of the previous year, and the downturn is expected to continue all year long. Main causes are the downtrend in the Turkish economy, which started in the second half  of 2018, the notable rise in interest rates and currency levels, and the significant increase in agricultural input prices, which cannot be tolerated by product prices. (note: tractor unit numbers for Turkey are not included in the European registration numbers).

As indicated by the September CEMA barometer, the general business climate index of the agricultural machinery industry in Europe is now in negative range for the third time in a row, with both current and future business expectations evaluated as negative. The expected slowdown in incoming orders is also confirmed, as 44% of the companies now foresee that their order intake would decrease within the coming 6 months (compared to 33% last month).

France now remains the only positive exception where a majority of respondents expect an increasing turnover for the next 6 months compared to last year, while Switzerland, Italy and Spain have now joined the negative indexes. Survey respondents also reflect the ongoing Brexit process developments, with a significant drop of expectations for the UK. 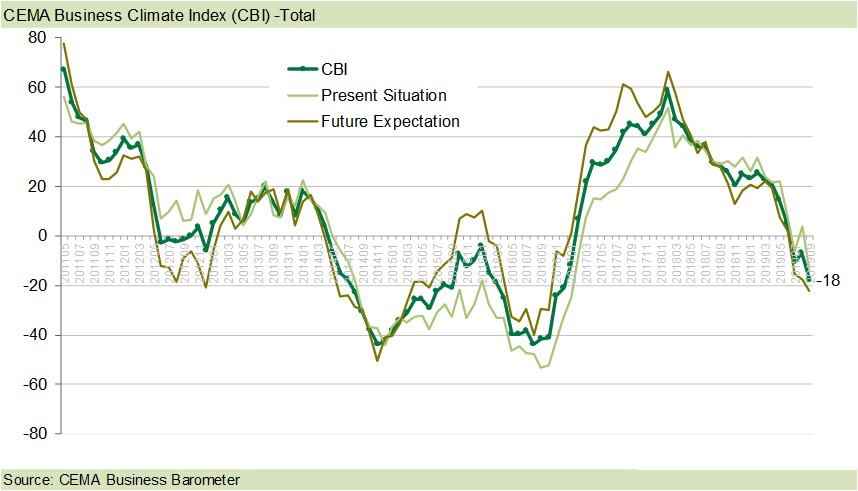 CLAAS ROLLANT 520: Reliable in all conditions

Get a demo now and learn about digital marketing strategies, SEO, and discounts straight to your inbox!

Reply Retweet Favorite
💥 We are happy to announce our new client ⚠ Now you can Review High Lift sprl on MachineryScanner! 👉… https://t.co/gHFNVPtvEK

Reply Retweet Favorite
💥 We are happy to announce our new client ⚠ Now you can Review MAVACAR on MachineryScanner! 👉… https://t.co/g767rGzctm

This website uses cookies so that we can provide you with the best user experience possible. Cookie information is stored in your browser and performs functions such as recognising you when you return to our website and helping our team to understand which sections of the website you find most interesting and useful.

Strictly Necessary Cookie should be enabled at all times so that we can save your preferences for cookie settings.

If you disable this cookie, we will not be able to save your preferences. This means that every time you visit this website you will need to enable or disable cookies again.